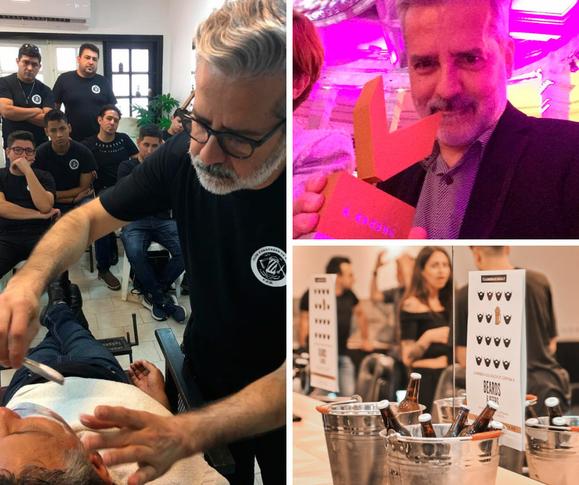 In La Barberia de Gràcia we don’t close for holidays, although we need them! August is presented as a haven of tranquility after one of the most intense months we have lived in recent years. Exhausted, but happy. Thus we have reached the summer.

We have traveled to Paraguay in an experience that we will never forget in which we have enriched ourselves as a human and as professionals. What a great country, how great its people! And although Paraguay is the farthest destination that we have walked this year, Jordi and part of La Barberia team has traveled throughout the Spanish territory giving training in Seville, Madrid, Burgos, … By the hand of Sebastian Professional, we have been able to share knowledge with dozens of colleagues in different shows and seminars. Who said traveling for work is not rewarding?

And in case we didn’t have enough emotions, last May we received in the spectacular Círculo de Bellas Artes in Madrid the Premio Salon Look to the best hairdressing salon design. After several nominations finally the award came with us to Gràcia, and now he looks proud in our collection of awards, a permanent reminder that every effort and hard work has its reward.

The climax to the season was put on by the fabulous cover that Revista Coiffure has given us, and in which we have released our latest collection, SQUAD. A beautiful full color that fills us with pride and that we never tire of admiring.

So many lived moments, so many stories to tell, they deserved a big celebration. Because, if we do not share the good times, what is the point of achieving success? For this reason, friends, colleagues, neighbors, family, and the media, we meet at the Beards & Beers party, with which we celebrate together, very cool craft beer in hand, that we are living one of our most special moments.

And that for many years we have reason to celebrate!