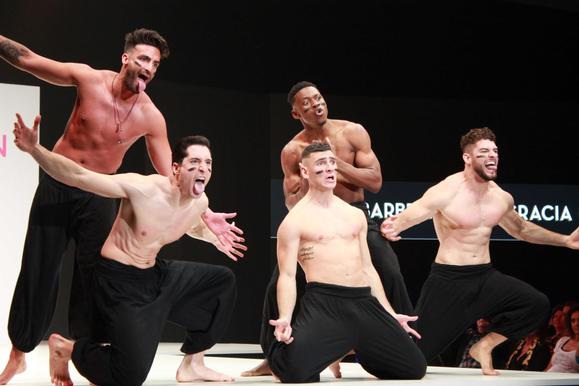 Last April, in the framework of Cosmobeauty Barcelona fair, one of the most outstanding charity events in the beauty sector was held: the Collage Show Solidario. In front of a totally dedicated public, eight of the most nationally and internationally recognized hairdressing firms were invited to parade presenting their proposals to raise funds for the Alzheimer-Down research unit of the Hospital de la Santa Creu and Sant Pau.

The Barberia de Gràcia was one of the brands present at the Beauty BCN Fashion Show, and Jordi Pérez left the attending professionals with an open mouth with a totally innovative staging.

Jordi Pérez designed a hairdressing show based on the world of sports. Usually, explains Jordi, the male hairdressing shows respond to very specific typologies: the Dandy style of more groomed men; a more youthful university style option; the hard rockers, and finally the athletes. Jordi opted to choose this last style, and chose rugby as the central axis.

In order to prepare the staging, the team had the immense luck of being able to count on the collaboration of Eva Martínez, the choreographer of the Barça Cheerleaders, who became involved altruistically – like the whole team – with the project.

To make the show more enjoyable it was structured in three parts, starting with a standard parade that became the part that most surprised the audience: a striptease with which the models were stripped of their shirts. Finally the show ended with one of the most recognized elements of world rugby: a Haka. This dance is a ritual of the Maori warriors to scare the enemy who makes the New Zealand rugby team before playing their matches.

The team of La Barberia de Gràcia confesses that having participated in such an important solidarity event was a real honor, and they value the result very positively.

It is a pride to be able to help the profession in its most solidary and altruistic way!